﻿"Tensions between the Hutu and Tutsi groups had been made worse by Rwanda's colonial rulers﻿ – Germany from the 1890s, then Belgium from the First World War. They both reinforced the Tutsi’s position of power within Rwandan society, making the Hutus even more resentful."
Ryszard  Kapuscinski
"It was never about civilization. Never about tribe or race. It was always about greed, arrogance, and power.
And when we finally grasped the horror...It was too late."
Sometimes In April
"Belgians struck up a quick liking with the Tutsi minority. Because of this, they created a strict caste system - something that had never before existed in Rwanda.This created resentment and tension. When Belgium left in 1959, all hell broke loose, as the Hutu majority rioted and drove many Tutsi out of their own country, while killing many others. From that point forward, the Hutu majority reversed the caste system, making the Tutsi the lower class. While the actual genocide took place in 1994, because of the havoc Belgium wreaked throughout the 20th century, ﻿Tutsi had been horribly mistreated, exiled, tortured, discriminated against, and killed with no repercussions on a daily basis since 1959."﻿
Kerry Zukus
Coffee, a major crop in Rwanda, saw plummeting prices in 1989, bringing about economic and social strife.
'Kangura' also published the Hutu ten commandments in 1990 (below). 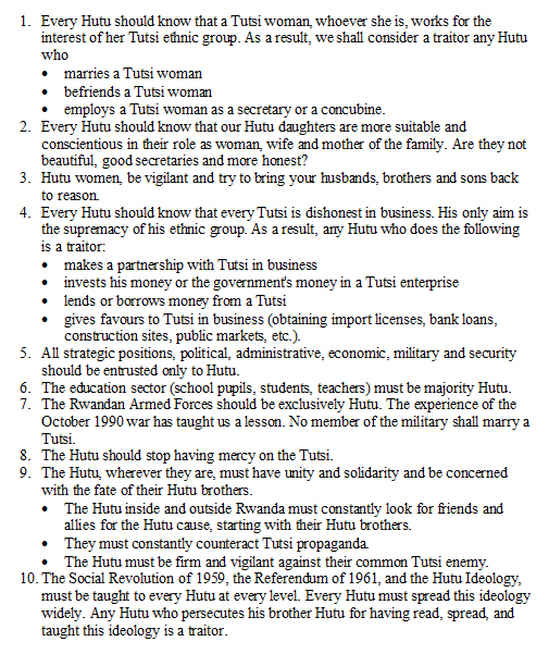