﻿﻿“Historically, the distinction between Hutus and Tutsis was based on class, rather than ethnicity.”﻿
﻿As We Forgive﻿﻿ 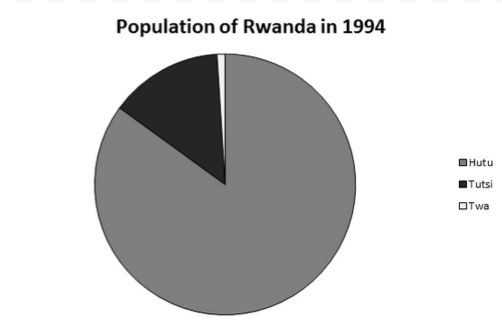 
Conflicts between Hutu and Tutsis date back to the 1950s. In 1994, the population consisted of 14% Tutsi, 85% Hutu, and 1% Twa.
"There are no different tribes or race groups in Rwanda. In fact, we can't even talk about Hutu and Tutsi as ethnic groups, as they share the same language and culture. This is why the current government says there are no Hutu and Tutsi, only Rwandan. There is some speculation that the words, hundreds of years ago, 'Hutu' and 'Tutsi' referred to occupation. The one group worked more in the fields and the other looked after cows, or to class differences. But there are definitely not tribes or race groups in Rwanda. Even the differences that the colonialists identified, thin and thick noses, is not accurate."
Cori Wielenga
The two men below, one a Hutu and one a Tutsi, show slight differences in nose shape and skin color.